Mark on your calendar: Thursday, February 13, 2020 to attend 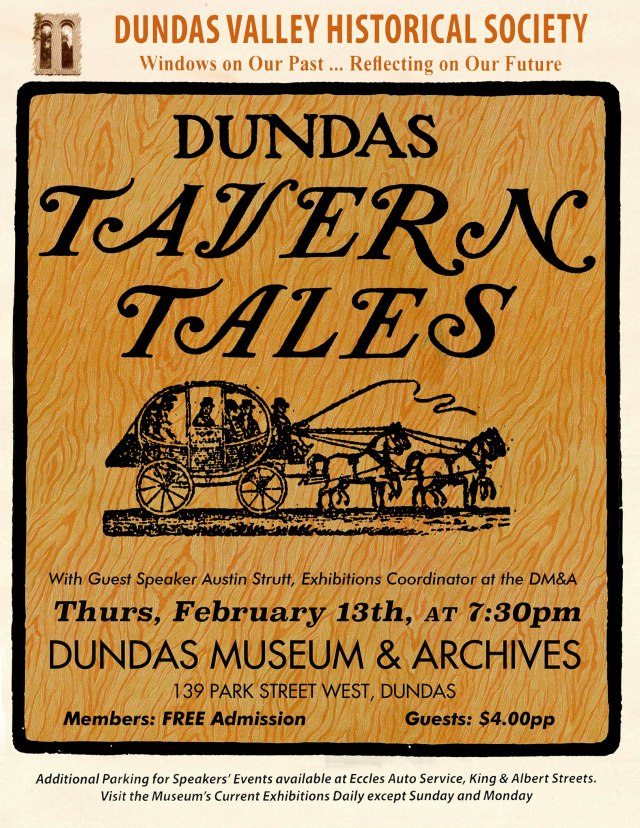 Every citizen of Dundas is familiar with the striking façade of the Collins Hotel, but do
they know of the great fire of 1881 which nearly obliterated the building? Are they
aware of the steamships and schooners which loaded great cargos of local liquor and
sailed them off to market on the Desjardins Canal? And as they pass the Elgin House
do they know why it was once derided by townsfolk as “McDonnell’s Folly”?

The streets of Dundas once played host to a staggering number of famous (and
infamous) drinking emporiums and groggeries. Their swinging signs and painted
awnings bore proud names like the “Bucks Head Inn”, “The Red Lion”, and the “St.
George and Dragon”. Tavern halls were the centres of local recreation, commerce,
and politics; the Town Hall even had a furnished saloon in the basement!
Austin Strutt, Exhibitions Coordinator at the Dundas Museum and Archives, will
present an intimate history of these local landmarks, liberally illustrated with previously
unseen archival photographs, maps, newspapers, and artifacts, discovered while
researching for his summer 2019 exhibit.

This is the second Speakers Night of 2020.

The stone lighthouse at the Burlington Ship Canal has been standing for 161 years to
guide ships into the canal. This lighthouse replaced an earlier structure that burned
down in 1856. Together with its adjacent keeper’s cottage, these two buildings are the
oldest still-standing structures on Hamilton’s “Beach Strip.”

Dundasian Stewart Patch will tell us the history of these buildings and their
relationship with the nearby railway bridges that crossed the canal in this location. He’ll
also talk about the present efforts of the Beach Canal Lighthouse Group to preserve
these buildings and make them accessible again to the public.
This is the third Speakers Night of 2020.

Before gaining recognition as a tourist destination, Niagara on the Lake was a notable railway town with both a steam powered railroad as well as an interurban electric line. Both railways had their own separate, parallel tracks running through the centre of the town.  This an account of investment and change, of which, virtually nothing can be seen today.  The presentation will explore the beginnings of the railway dating back to 1854 and the resulting economic and strategic benefits it had for travel, tourism, industry, agriculture and the military up until its closure in 1959. Others topics such as railway safety, construction and equipment will be included and the presentation will utilize period maps and many black and white photographs.