Comment: As I sat watching the orchestra playing music in the Dundas Driving Park last summer, I wondered about the origins of the park. How did this large park evolve over time? C.L. St. George

In 1822, George Rolph purchased a large section of land in the northern part of Dundas. He permitted a portion of this land, to be used for picnics, sports and    outdoor activities.

In 1865, after he subdivided his estate, the portion that would later become the Dundas Driving Park was purchased by his son-in-law, Doctor Walker and his associates.                  Dr. Walker immediately installed a trotting and harness racing course; something that George Rolph had not allowed. 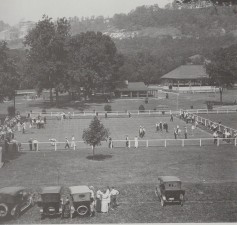 …………the wading pool, the bandshell and the tennis courts were established.

A few years ago, the park was renovated with a new bandshell, wading pool, skating rink and new pathways.

Years ago, the western rock garden was deliberately buried. However, it has been unearthed and a new floral garden has blossomed under the care of local volunteers.

Recently, I made a purchase at an antique shop called, “Square Nail”. Obviously, the name has some connection with antiques but what exactly is a square nail? 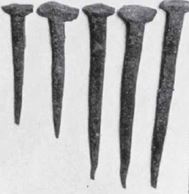 Up until the 1790’s, all nails were square in the sense that all four sides were of equal width.

These were made one by one by a blacksmith.  They were formed from a red hot square rod of iron. The blacksmith would hammer the rod, gradually thinning the thickness before fashioning a point. The “nail” would then be cut from the rod and the blacksmith would hammer the opposite end creating a head. Unless furniture has been imported from the United States, Quebec or Europe, actual square nails would be rare in Ontario.

In the 1790’s, nail production became mechanized. Nails were cut with a steel knife from an iron plate. Since the nail’s width would be wider than the thickness of the iron plate, the nails would be rectangular rather than square.

By 1810, the technology improved again.  The knife alternated the angle of the cuts. First it cut to the right of perpendicular then left of the perpendicular, thus increasing production. A secondary process created the nail head.

The difference between a 1790 nail and an 1810 nail would be of considerable importance to professional analysts.

Since the 1810 nail technique remained in use until the 1890’s, most iron nails found in demolished wooden structures would be of this improved production vintage.

In the 1890’s, round steel nail production flooded the market.

Iron nails today are used only in situations where the steel nails are not appropriate.

Recently, while driving along Cootes Drive, I saw that some construction was underway where the pier is to be built. I know that it is expected to be finished by the spring. Can you tell me what progress has been made?

We are currently wrapping up some final detailed design changes prior to steel fabrication and contractor mobilization onsite. The final area will look something like the original concept. However, instead of having fabric shade structures (as shown) there will be a wooden trellis feature overhead to provide some shade for visitors.

Just one point to clarify; we consider this more of a viewing or resting platform than a “historic pier” replication. The intention is not to recreate a historic element of the site.